Get this asset pack and 20 more for $45.00 USD
Sci-fi & More Bundle
View bundle
Download NowName your own price

Hi! This pack now has a tileset that works well with the characters!

The Storm Head Droid (119x124) - Idle, Run, Attack , Damaged, and Death animations (damaged and death are not shown below, but the death is cool :P)

This character was designed to be aggressive and cause choas

This character was designed to deal quick burst damage

This character was designed to be... badass

Feel free to use for commercial projects and modify the characters if needed. Please use Penusbmic If you want to offer me credits. Please do not resell the assets individually. Thank you! Check out my page for some free pixel work and other cool characters!

Check out my entire Sci-fi Series!

Get this asset pack and 20 more for $45.00 USD
Sci-fi & More Bundle
View bundle
Download NowName your own price

Just wanted to say your assets are so good. Incredible economy in both the artwork and the animations. Thank you for making these available.

The last two characters are not in the zip file. What happen?

Yes they are, you are probably downloading the freebie (stormhead) the other two must be bought. If you scroll down to more information, right above the comments you'll see the appropriate zip file and that can be downloaded if you purchased the pack!

You probably downloaded the freebie character, the other 2 are purchasable! Sorry for the confusion

Hi! We loved your art, so we bought some of your assets and used them on our project, you can try it here. Hope you like it. ;)

Thank you so much! :D

im just learning how to code and I love your amazing assets and characters, theyre so cool

This is awesome. Thank you very much.

Instead of making a .gif you could make sprite strips?  Thank you.

there's sprite sheets in the file...

Hey, I was wondering how is possible to make the character Shadow of Storm shoot downwords

Hi, awesome assets! Would you mind adding a LICENSE file to the zip?

Man! Your assets have always help me! Keep it up!! ^^ But Can you make a free main character plzzzz!!

Hi, what is the license for this work? Can I use it for a commercial videogame?

yes! There's a little paragraph with the license on the page ☺️

Good night. Your job is very good. Then think about getting all enemies a paid package. it would be interesting.

Thank you! I think once i get 10 complete sci-fi packs I'm going to do a mega pack with all the characters for a small discount! :)

the run animation is on the right side,will flipping the images help to create the left one

yes! I only ever do one direction, devs just code in the flip 😊

ok thank you keep doing this your art is great

Hello, this is definitely an awesome job, i looked for a lot of assets pack but i got a crush on yours and want do a game based on it. I'm not sure if it will be a metroidvania or just 2D adventure game but i will find. I just need to find some levels assets that are in the same kind of yours to have a coherent univers, if you have suggestion to level/background pack to do a game with your assets, let me know :). Great job buddy btw.

Hey thanks so much! And I do have a couple tilesets you can check out! I might make a new one soon ish as well

Dude, I cannot express how much appealing and cool these characters pack are. Your work is so sublimely done that I'm appalled by the lack of succesful indie games with your assets. If I'll ever find the right story and background for a neon sci-fi game, your packs will be undoubtely my first choice.

Thanks man! I appreciate the kind words. I hope one day I stumble on a game on steam or something using some of my work, that would be a badass moment.

If you do be sure to keep me posted!

It's bound to happen. Such cool and badass characters won't go to waste, it's just a matter of time, and I can't wait to see what will you create next ; ) 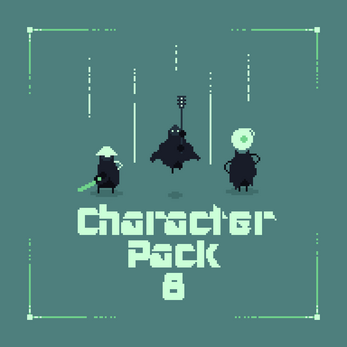